Many of my readers now that being asked for camera buying advice is a somewhat regular occurence for me. Mike Johnston of The Online Photographer summed it up about as well and succinctly as I have ever read in one in a series of recent posts:

“But seriously, here’s how to buy a camera: figure out what lenses you need first, and who has them; figure how big a camera you want to carry; figure out (from that and from the pricing and your budget) what level or tier you’re going to be looking in (and this level is a good one); then pick one and get on with it.”

My usual advice is to find the Canon camera that best fits your budget and desired features and then talk yourself into the next higher-priced model. If someone complains about not wanting to buy a Canon, I tell them that they asked the wrong person for advice. That’s not entirely true, though, since I do occasionally recommend Panasonics too.

Update: The day after writing the above, New York Times personal technology columnist David Pogue offered this even-briefer bit of advice in response to the cocktail-party question, “What camera should I get?”:

I’ve recommended the first camera. The latter I’m not very familiar with, but I have long found Nikon’s user interface to be confusing.

I’m in the midst of this year’s journey to the SXSW Interactive Festival in Austin, TX. I have described it in the past as a giant, five-day-long group hug for the builders of the web. This is my fourth visit to this conference in the past five years.

You can stalkfollow me around on

Here are some links to stories and photo sets from my adventures of 2008:

Keep checking back. I might not be done yet.

I don’t post here often enough. I realized the other day when I was thinking about posting this that I haven’t posted one of these in a year. I hope to be able to start writing here and on the work blog more often.

Without further adieu, the most popular content here for the third quarter of 2008, according to Google Analytics, is:

The old photo gallery still gets a bit of traffic here, too. One of these days I may actually finish moving all that stuff to Flickr (some of it’s duplicated), properly handle redirects, and get a nice solution in place for displaying the Flickr stuff here. Some day, maybe.

The most-viewed old photo galleries here in this time frame were:

Tubing, bicycling and butterflies — yeah, that sounds like me. 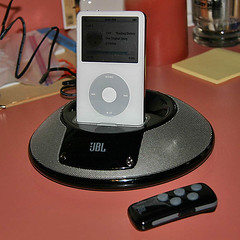 My latest gizmo arrived today. The JBL On Stage II iPod speaker was an impulse buy last week when I saw it on dealnn.com for 40 bucks. I had been looking for something like this to take along while traveling and for occasional use around the house. I don’t like wearing earbuds.

I like the size. I’ll have no problem taking this along in a suitcase. I can leave the iPod charger at home since this will do that, too.

The sound is big. It sounded good in the large great room in my house. I have no doubt that it could be cranked up loud enough to have hotel room neighbors complaining.

It comes with a short cable for hooking up non-dockable mp3 players or, say, a laptop. I think it would work well in a dorm room too, but a student might rather have a device that also functions as an alarm clock radio.

I was wondering why these were being sold at over half off. Well, I think the most current dock connecter in the package (and there were many) is the one for my now two-year-old 5g 60gb, which is shown. Also, the remote control only seems to be working intermittently so maybe the battery in it is nearing the end of its shelf life. There also may be concerns for some about whether it is iPhone compatible. I can tell you that it is iPod Touch compatible.

Some may consider it a drawback that it doesn’t take batteries to make it truly portable. I don’t care about that. If I need to be that portable, I’ll put on earbuds or headphones. 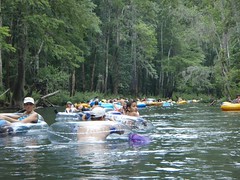 My photos from my bike club group ride and Ichetucknee River tubing adventure over the weekend were my first successful integration of photography, my recently-acquired GPS unit, and my quest for adventure. 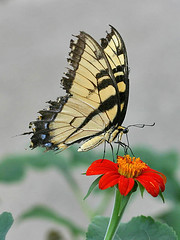 It was a good weekend for butterflies in the garden. On summer weekends around the house, I usually keep my Canon Digital Rebel D-SLR by the front door (and therefore near the butterfly garden) with the Canon 75-300 zoom lens on it ready to go should my visual motion detector go off as I gaze out the windows facing the garden.

I had a visit Saturday morning from one of my favorites, the black form of the Eastern Tiger Swallowtail butterfly. I took a bunch of pictures and was very disappointed when I downloaded them. Maybe I was particularly shaky for some reason. I thought the light was sufficient.

Later in the afternoon, the black butterfly was still hanging around and had been joined by its more typically marked cousin, shown here. It was clouding up for an afternoon thunderstorm making it less bright than earlier and I thought that was trouble if I went out there with the big zoom. So I grabbed my fastest (and lightest) lens, the 50mm f1.8, put it on the camera, and went out and got some great results. I probably could have cranked up the ISO, but I didn’t want to deal with the noise.

I was worried about getting close enough to the butterflies with such a short lens, but I was inspired by having seen David Pogue’s funny video demonstration of how to zoom the fixed-focal-length Sigma DP-1 and no doubt also thought of Derrick Story‘s frequent admonitions to “get closer” and got as close as I could. I am pleased.

Another option would have been to grab the 17-85mm IS zoom, but it’s heavy (the 50mm is light as a feather) and not any faster than the big zoom.

One of the problems I have with shooting the 75-300mm zoom for butterflies is that you can only get as close as about 5 ft. with it. (Why do I always think 7 ft. while shooting?) I often don’t think that’s close enough. The 50mm and the 17-85mm zoom both get you within 18 inches.

I hadn’t yet listened to Derrick’s podcast show from last week about how sweet good glass is. That reinforced the decision I am mulling about getting the Canon 70-200mm f4 L zoom lens to go with the Canon EOS 40D I am thinking of upgrading to from the Digital Rebel. Derrick might say that I just ought to go ahead and buy the lens, based on what he said on the podcast. (I looked and it gets you as close as 4 ft.)

Ironically, the 50mm/f1.8 is also the cheapest lens in my bag. 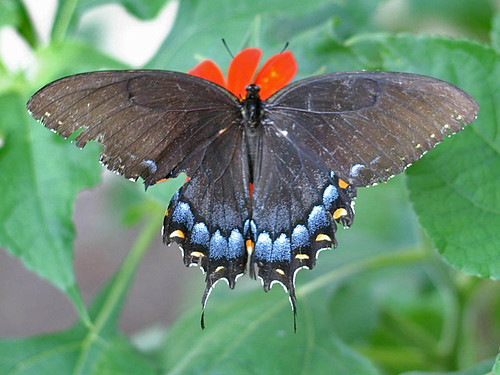 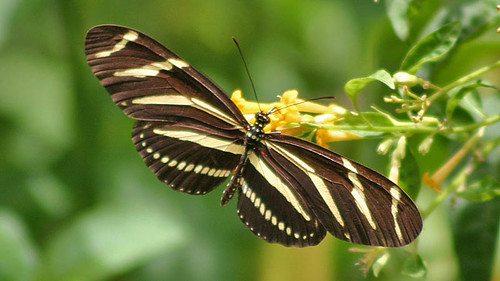 The Zebra Longwing (Heliconius charitionius) is the state butterfly of Florida. They used to be a rare sight in my butterfly garden, but this year are the most common sight so far. The Orange Cestrum (Cestrum aurantiacum) is the most popular plant in the garden so far this year too. It’s grown too big for its spot though and needs to be moved or at least severely pruned this Fall. 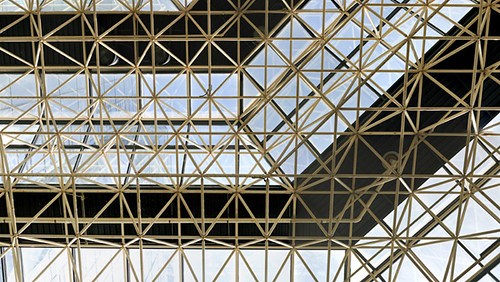 The photo was published as part of Derrick Story’s “Photo Assignment” gallery for April 2008, “Angular,” on The Digital Story web site.

I’ve been thinking about a quick and probably oversimple financial analysis of the benefits of the MyCokeRewards.com and PepsiStuff.com rewards programs. I’m typically more of a drinker of Coca-Cola products–mainly Coke Zero and Powerade (after kayaking or cycling)–and have participated in that program for much longer, but the affiliation of PepsiStuff with Amazon.com and the ability to buy music there with the points has gotten me interested in that program as well.

The simpler analysis is probably PepsiStuff. One 20 oz. bottle gets you one point. Five points gets you a song download on Amazon. A song typically goes for 89 cents. So each point is worth about 18 cents. The caveat is that not every song is buyable in this manner.

With MyCokeRewards, I often redeem 220 points for a gold movie pass good at AMC Theatres. The maximum current price of an AMC movie ticket is $9.50. The makes each point worth about 4 cents. One 20 oz. bottle of soda gets you three points, making the value of the points per bottle about 12 cents. I often buy my Coke products in 12-packs, however, and the point value on the 12-pack then works out to 40 cents.

I also saw a sign on the convenience store door that said MyCokeRewards was like, “buy eight, get one free” on 20 oz. bottles. In that case, if the store charges $1.39 for your 20 oz. bottle, the value per point is close to 6 cents and the point value per bottle works out to about 18 cents, which gets us back into the PepsiStuff value ballpark per 20 oz. bottle purchased.

I might have to do a further exercise to see if the point differential would make it beneficial to buy six-packs of 24 oz. plastic bottles rather than 12-packs of 12 oz. cans. Then you’d have to get into the eco-friendliness of plastic bottles vs. aluminum cans, too. I always recycle both, btw.