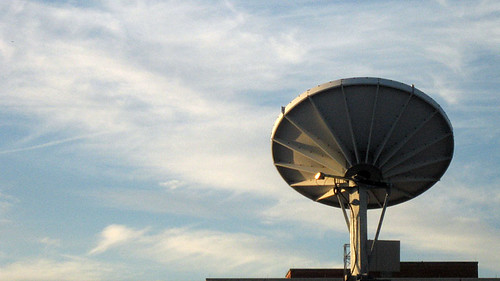 The view from the office window on a Fall workday morning. I’ve been enjoying the light play of the sunrise on the bottom of the satellite dish for the past couple of weeks or so.

Here are some of my favorite things found online relating to the Florida Gators winning the NCAA Men’s Basketball Championship. 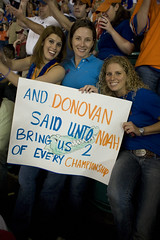 From AM850: AP Video of the post-game celebration on University Ave. 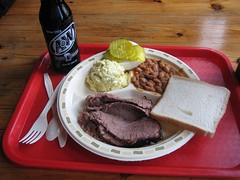 I’m currently in Austin, Texas attending the SXSW Interactive conference. The first order of the day yesterday, following my arrival, was a BBQ lunch at the Iron Works. The photos have started going up on Flickr.

I picked up a new gizmo last week on my holiday Friday off of work, a Belkin TuneTalk Stereo accessory for my iPod. It records in either “CD quality” (44.1 KHz, 16-bit, stereo) or lower quality (22.05 KHz, mono) using its built-in stereo microphone or from an external microphone or sound source using its 1/8″ input jack. It only works with “5G” iPods. It cost $69 at The Apple Store.

We’ve been doing a lot more with audio at work this year and it’s been fun. It’s handy to carry an audio recorder around and this is certainly much smaller than a Microtrack is, if I have my iPod with me anyway. It can also record for a lot more time and certainly has longer battery life than the Microtrack.

I was asked today, “what are you going to record with it?” and couldn’t give a good answer. It would have been handy to have along on my trip to Britain this year so I could show family here what the family members we met over there sound like. I can take it to church and record more sermons for the Web site (even though Gary has passed away and I miss him tremendously). If my grandparents or my father were still around, I could use it to record oral history from them. If you’re a family historian or genealogist, I think an audio recorder is now a must-have tool (I’m a recovering one). I can record the wind chimes on my back porch or the sandhill cranes down by the lake.

When I showed it to Mindy today she said she wanted to hear some samples online (I suppose so she can hook me up on her work blog). These were made with the built-in mic. I haven’t tried any of the better mics we have around yet. They are also unprocessed except for conversion from .wav to .mp3 format.

The following was recorded in my office. I just grabbed an announcement off the table in the lab and read it into the recorder.

I wanted something better than that, though. So at home I read a passage from the book I read over the weekend. I like it better.

Update (14 Nov): I had a brief opportunity today to try it out with an Electro-Voice 635B handheld microphone. I read the guest speaker announcement again because that was handy. The levels came in a little lower than the built-in mic, possibly due the low-end cable that was available today. We have some other cables ordered and we’ll try that when they arrive in a few days.

Last night at UF, renowned photojournalist David Burnett gave an excellent presentation at the Union auditorium in conjunction with his exhibition opening at the Union gallery. The humor and enthusiasm in his talk was infectious and I came away with a lot of enthusiasm for the art form. Let’s see what I do with it. You can watch a replay of the presentation online, which I produced.

It was interesting to note that at any given time he could take a picture with a Canon D-SLR, a 4×5 Graflex, a Holga, or a digital point-and-shoot, which he produced to take a photo of the audience so he could show his Mom how many people came out to see him. I might have to pick up a Holga to play with.

I’m writing about this here rather than at work because this is where I blog about photography.

Update: After I sent him a tip, photographer, author, and editor Derrick Story posted a link to here and the webcast on his excellent blog, The Digital Story. I highly recommend his blog and podcast to anyone serious about their photography.

I really should. Maybe I’ll comment on the new TV season sometime. In the mean time, however, I have posted several photo sets over on Flickr.

On Friday, April 21, I head off to Tampa where I will be giving two presentations, “Web Publishing Tips” and “Video and Audio for the Web,” at the annual convention of the Florida Scholastic Press Association. I have a soft spot in my heart for the FSPA because I attended the convention twice (’80 and ’81) as a high school journalist. The presentations are not open to the public, but the slides will be online afterward.

On Thursday, April 27 at 7 p.m., I will give a presentation on “How to select and use a digital camera” at the Melrose library. All are welcome to come and bring cameras or problem photos and get free advice on usage or improvements. I have given this sort of presentation before and have always been well-received. The first time I did this, I sold a photo. This presentation is free and open to the public.

I wrote today at work about a recent quick project wherein I added a podcast to the Rock104 web site.

My friend Matt, the designer of the Rock104 site, asked me if he could use the code for AnRWatch.com, another site he’s involved with. I was happy to share the code, but it had to be rewritten in PHP first, which I did as a learning exercise. That ended up being easier than I thought it would be. AnR Watch is a monthly webzine that promotes new, unsigned rock bands.

I mentioned these projects to my friend Susanna, who I know is interested in podcasting since she’s both a musician and a web designer. She asked if she could use the code for podcasting sermon recordings on her church site. I sent her the code.

And I mark nine and a half. Web design guru Jeffrey Zeldman wrote two weeks ago about the occasion of the 10th anniversary of the launch of his personal web site, just a few months after publishing his first commercial web work, for a movie.

That summer of 1995, sometime in June or July, Tony Barr (the owner of Barr Systems, where I then worked as Publications Editor) walked into my office and said words to the effect of, “Craig, we need to have a web site and you’re the one to build it.” Sometime that July, my then boss Paul Firth, the marketing director, and I went to Orlando to a seminar on “Internet Marketing” where we didn’t learn much besides the fact that everyone else present was new at this stuff too. That trip also marked another more personal milestone, but that’s perhaps a story for another time.

My first encounter with Jeffrey Zeldman came sometime when I worked for Barr and started reading A List Apart, on online magazine for web developers which he founded, probably during 1999 or 2000. I didn’t know specifically of Zeldman though until my friend Erin pointed his personal site out to me in 2001 or 2002 and I connected him to A List Apart at that time. I met Jeffrey in the Fall of 2003 at the WebDevShare conference at Indiana University, where he was the keynote speaker. He autographed my copy of his book and couldn’t believe that I brought it with me on the plane in hopes of getting it signed. I met him again this year at the SXSW Interactive conference in Austin, Texas and even had my photo taken with him. He reminds me of a lot of guys I grew up with in “New York’s Southern Branch Office” (Miami if you can’t figure that out).

We launched the Barr Systems web site within days of the 1996 New Year. I stuck around Barr until the Winter of 2001 doing less and less print and more and more web (with some programming thrown in), until I left for the slightly less green, but more friendly pastures of the University of Florida, where I had worked before Barr. (If you ever want to see me head for a door, just suggest that I become a programmer.) I don’t recall exactly when I first launched my personal site with an Atlantic.net “tilde” URL, but it was probably in 1996 or 1997. It became CraigDidIt.com in 2004.