This post is only about a month late. I didn’t feel like writing though. So shoot me.

The aformentioned camera conundrum was resolved in mid-December when, after spending what seemed like a couple of hours in Best Buy going through every menu and setting on the camera, I brought home an Olympus Stylus 770 SW.

I feel guardedly positive about the purchase. “Mr. Though shalt buy Canon” brought home an Olympus and I’m not used to the UI or the handling quite yet. One thing that’s taking getting used to is the lens being up in the corner of the body. I’ve taken several pictures that contain a fat-finger corner vignette. 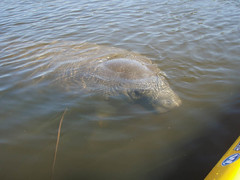 It has performed very well on its first couple of kayak adventures–to Turkey Creek in Palm Bay during Christmas week and up and down the Ichetucknee River on New Year’s Eve.

I love the sturdy feel. The handling is good even with my big, thick-fingered hands, but I sometimes find myself pushing the wrong button due to unfamiliarity. The screen is good enough to shoot with in broad daylight which is good because there is no optical viewfinder.

I haven’t tried the panorama feature yet because I just got an Olympus xD card last week (a gift). I don’t like that Olympus makes you buy their memory cards in order to unlock features. I wish is used SD memory instead just because the world doesn’t need so many memory card types.

I wondered today, when I read the Olympus announcement of the Stylus 1030 SW, whether I should have waited. I like the look of the Canon-ish mode dial. 10 megapixels (vs. 7) and the more versatile zoom specs might come in handy too. This isn’t my first experience with this, I think I bought my Digital Rebel not long before the Rebel XT came out.