I’ve written before about photographer, author, and editor Derrick Story and how much I enjoy his podcast. He took things to another level back in May (this post has been stuck in “draft” for far too long) when he started up The Digital Story group on Flickr where members can share their photos, critique those of others, and post questions and answers in the discussion board.

I joined the first week and the group now has over 400 photographers as members. I haven’t found enough time to go through them the past few weeks and want to make a better effort at doing so. I don’t know when Derrick finds time to sleep.

I noticed some interesting search-engine driven hits while reading the web traffic reports for this site over the past week. I’ve actually gotten some traffic as a result of the political downward spiral that Sen. Larry Craig has found himself in. I’ve received hits on the seach phrases “what craig did” and “why craig did it?” At the office this week while the story was breaking, I kept seeing “____ says Craig should resign” all over the news channels in the lab so I looked at Dave at one point and said, “I quit.”

This is not my first experience with politically-driven off-target search-engine hits. Back when Rep. Mark Foley was in his own tailspin, we saw some hits at work on the phrase “Foley humor” because we happen to have a Prof. Foley on the faculty. 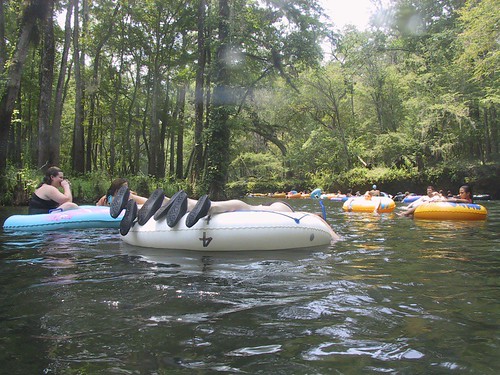 According to Google Analytics, the top five most-viewed posts here during July were:

The most popular photo albums for July were:

I need to post here more often–if for no other reason than to keep certain undesirable visitors entertained. My excuse for July is that half of it was preoccupied by a vacation, its prep and aftermath. I was pretty active on flickr. I have a post about a photography topic that’s been in draft mode for over a month. I should finish it and also write about how I spent my summer vacation. Maybe this week, or maybe not.

According to SlimStat, the top five most-viewed posts here during June were:

A lot of search-engine-generated traffic came in looking for Ichetucknee Springs tubing photos and pictures of caterpillars and butterflies. The most popular of those destinations are: 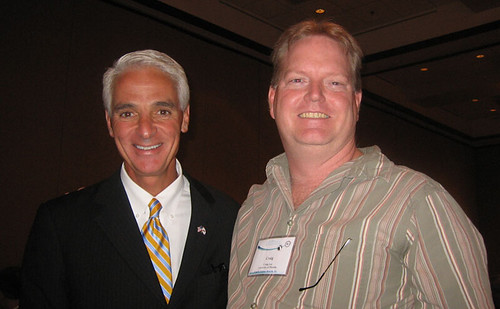 I spent Thursday and Friday of this past week working at the Florida Press Association/Florida Society of Newspaper Editors Convention heldÂ  at the Sawgrass at Ponte Vedra Beach resort. Florida Governor Charlie Crist came to the convention on Friday at lunch time to give a speech, get an award, and sign a bill (but not to eat lunch with us). He loves to have his picture taken and had many taken while he worked the room prior to the speech. He saw me standing there (I was on the ready to get photos of him with my bosses as he approached their table) and came to me and chatted me up. Gary did the honors on this picture.

This is a great example of why you should always have a camera with you. 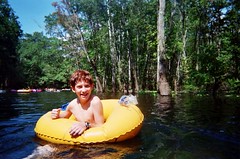 Since, based on web traffic reporting, there’s so much interest in Ichetucknee Springs tubing (and why shouldn’t there be?), I thought I’d collect links to all my photos on the subject in one place.

The first set of photos was taken with a Fuji waterproof disposable film camera with processing and scanning to cd-rom by a local lab. The latter two sets were taken with my old, reliable Canon PowerShot G1 inside an AquaPac case.

I wrote a while back about switching from the FAlbum plugin for displaying my Flickr albums locally. With the new template, some problems with the other one, and some improvements to FAlbum, I decided this evening to switch back to FAlbum. I hope this weekend to tweak things so they better fit in the template. Enjoy!

I’ve been meaning for weeks to switch the template of this site to DePo Clean theme by Derek Powazek. So now I’ve gone and done it. It needed a little more tweaking than I thought it might, but I’m getting figured out. I don’t know yet what I’m going to put in that right column.